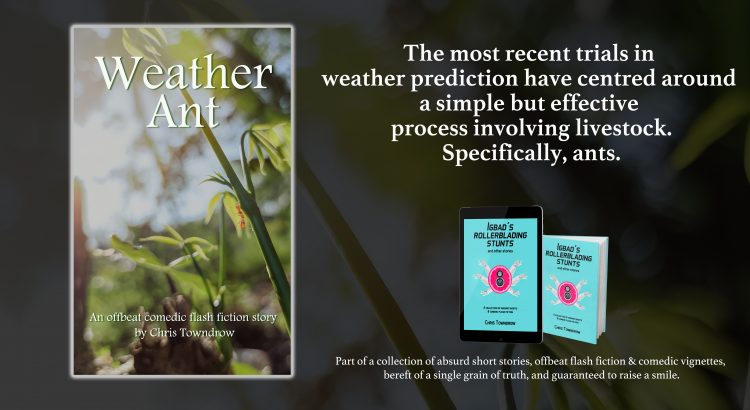 For many generations, mankind has sought to forecast the weather, whether for personal interest or the public good. To put the latest development into context, we must briefly examine how weather forecasting has evolved through history.

The United Kingdom provides the sternest examination of the forecaster’s art, with its unique location and dreadfully dull inhabitants who seem unduly preoccupied with the conditions.

Early cave paintings, discovered recently in Bromley, depict a man called Brian sticking his head out of the cave entrance and looking heavenward, then retreating inside to report to his commune that “It looks like rain”. This is followed by a discussion on the matter, particularly “What a lot of weather” they were having. This tedium lasted until the following morning when it was time for Brian’s ritual sky-gazing and the pursuant soporific deconstruction. It appears that this pattern continued for many days until the commune realised that none of them had been out to hunt and suddenly starved to death.

Victorian-era Derbyshire was graced by the legendary Mrs Climate (real name Geoffrey Whimsy), who astounded the small community of Speg with her predictions. Every evening at eight o’clock, Mrs Climate would announce her forecast for the ’morrow in the town square. The insight was based upon her perpetual sufferance from the common cold; if snot ran from her left nostril, it would be fine; if it ran from her right, it would rain. Records of the time show that her accuracy reached as high as fifty-six percent, and she was highly publicised until her untimely death in a strawberry picking incident.

The most notable advance of the nineteenth century was Waller’s Patented Weather Forecasting Machine, designed by Xavier Waller in 1897. This was the first mechanical device dedicated to climatology, an incredibly complex contraption roughly the same size as four pot-bellied pigs. Powered by a mulch consisting of finely shredded butterfly livers marinated in vinegar, the noisy machine span its various cogs and wheels, tapped its various tappets and whirred its sundry whirrs for nine hours before turning a dial clockwise or counter-clockwise depending on the predicted clemency. Some ten thousand people attended the first demonstration in Hyde Park, and memorably the machine’s first public forecast was correct. However, rising the next morning to see the prediction come true, a self-satisfied Waller was mobbed outside of his front door by the Butterfly Protection League and elbowed into a coma.

Latterly, the steady advance of computers has contributed significantly to forecasting accuracy but naturally is a costly process. The most recent trials in weather prediction have centred around a simple but effective process involving livestock.

It has emerged that the Met Office have been undertaking secret forecasting tests within the bowels of their HQ, and, more startling that some publicly distributed forecasts over recent months have not been the result of immense computing power;

In 1998 a dull forecaster named Melvin Tuttle was examining his ant collection at home when he discovered that one of the tiny tunnels in the soil of the formicarium had collapsed, stranding an unfortunate ant. Not wishing to disturb the colony, Melvin left the ant to its fate—running in circles around the chamber—and set off for work in the rain. That evening, he returned to find the ant still running. The weather, he remembered later, was still inclement. The following morning, it was still raining, and the ant was still running. That evening, however, the ant was very subdued, even though the weather had not subsided. By first light, Melvin was up, checking out the ant-ics. The isolated pet was digging. Outside it was fine.

This behaviour went on for a few days, and Melvin began taking notes. Soon, a pattern emerged. By noon, it seemed, the ant had a good idea of what the weather would be like for the following day—running for rainy, quiet for sunny, digging for cloudy.

Melvin named the ant Predicto and kept records of its success. He also wittingly caused another tunnel to collapse within his glass-contained ant colony, trapping another specimen, so he could ascertain whether Predicto’s talents were unique.

Excited by his discovery, Tuttle passed on his findings to the Met Office director, Olly Solly, who initially laughed the man out of the building. Luckily for Tuttle, though, it was budget time for the business, and Solly’s brow was furrowing over the increasing costs of his bank of mainframes. Realising that by retaining the powerful computers, he would instead be under financial pressure to cut back on his attendant array of seven blonde secretaries and start spending more time with his wife Molly Solly, a brickie. As such, the director swiftly called up Tuttle and entered into discussions with the man he’d hitherto called an “insect molesting timewaster”.

Soon, Tuttle had relocated his ant farm to the Met Office HQ and began parallel forecasting alongside IBM’s finest. After a short period of adjustment for Predicto and colleague Foretello to get accustomed to the new microclimate, the ants began to match the computer for the accuracy of the following day’s forecasts.

Things were going well until Predicto died unexpectedly. Tuttle, however, was quickly on the case, and after a short period of mourning, he installed a replacement—also called Predicto—into a larger cavern, this time with its own food supply and some miniature dirty magazines.

As different generations of Predictos and Foretellos came and went, Solly began to scale back his computing resources and rely more heavily on the combined talents of the ants. When segregated from its peers, every individual quickly took on the mantle of weather forecasting, unearthing a behaviour previously unknown to naturalists.

The Met Office managed to keep the whole deal quiet until last week when Ant Rights protestors broke into the office and absconded with the colony. This spells trouble for Solly and Tuttle, who are known to be in discussions about whether to revive the project or return to the age of computing. They will surely be mindful of yesterday’s revelations linking Martin Whisper, Chairman of IBM, with the head of the Ant Rights Group, the shadowy Martina Whisper.

One thing is sure; we have not heard the last of animal experimentation in this field.