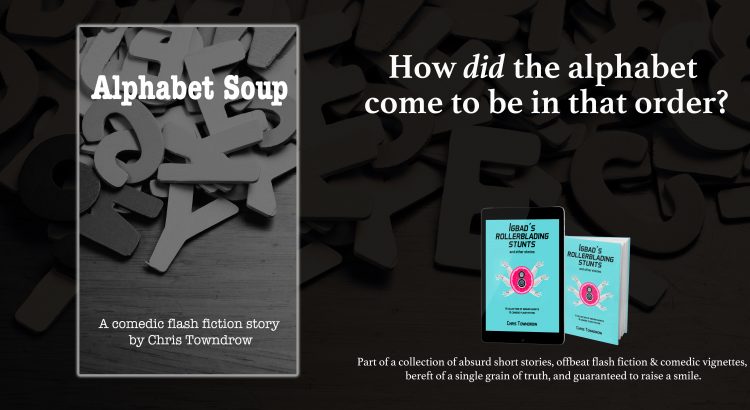 It was getting late, and they had barely made any progress. He could see the hints of frustration etching into Quiggle’s face as he sank into the chair.

Tallyjohn, the King’s Master Of Letters, tapped his fingers agitatedly on the meeting room’s plain round table.

Quiggle sat down opposite. ‘This is like painting the Forth Bridge,’ he sighed.

‘The what?’ Tallyjohn asked. It was 1487, and the Forth Bridge hadn’t been built yet.

‘We could stay here all night and come up with a million different answers,’ Tallyjohn offered. ‘He’ll only go and change it anyway.’

‘Well, of course he will,’ replied the bald Master Of Letters, replete in his Metallica T-shirt, even though Metallica and T-shirts hadn’t been invented yet. ‘You can’t have S after B.’

In response, Tallyjohn jumped up with a measure of indignation and slapped the whiteboard that hadn’t been invented yet. His finger snagged the magnetic cut-out S, and it flipped to the floor. He bent down quickly and was about to slap it admonishingly back into place but then slid the Q across a little and pressed the S to the board next to it.

He indicated the new sequence with a flourish. “Q, S, B, F, A, L etcetera. Much better.”

Quiggle rolled his eyes and shook his head sadly. “The University won’t stand for that. QSBF? Try lecturing that to some spotty nineteen-year-olds.’

‘Teenagers aren’t my problem, Advisor. The King wants the alphabet arranged in a decent memorable order, and I’m not losing the rest of the evening and night debating it.’ He looked at his non-invented digital watch. It was gone eight, and outside, dusk was falling.

‘My tea will be getting cold too, you know. It’s salad tonight.’

‘So let’s try and agree. It’s only the King we have to please, not you or I.’

Quiggle thought for a moment and then nodded. ‘Okay.’ Even though okay hadn’t been invented yet.

‘But M, C, Z?’ the Language Advisor queried. ‘Hardly brilliant, is it?’

Quiggle got up and pulled the magnetic Z off the board. He walked behind Tallyjohn and put the Z on the extreme left edge of the board. ‘Look,’ he said, ‘Z first. Start with an angry letter, and then all the other countries will sit up and take note. We’ll have the best alphabet in the world. See – it’s a purposeful start – ZHXJE.’

Tallyjohn threw his hands in the air. ‘I give up. Do you know what your problem is? Your problem is that the King isn’t your problem. He’s mine. If I go in there tomorrow and start with this ZHXJE nonsense, he’ll have my head off faster than you can say Englebert Humperdinck.’

‘I won’t go in there with ZHXJETKO to start and that BFSAL crap in the middle.’

‘Arrange your stupid alphabet how you want.’

‘No. You’re the King’s whipping boy. You bloody do it!’ With that, Quiggle strode to the door, threw it open and slammed it shut after him, making the walls and the board shake.

Tallyjohn glowered after him, but it did no good.

‘Fine,’ he shouted to the room. ‘Then that’s how it is. Either he likes it, or I’m deader than a dodo, even though they aren’t dead.’

With that, he punched the board and wished he hadn’t, then, boiling at Quiggle’s hot-headedness and his own impending demise, left the room and gave the door a good old slam.

The board shook violently, and all the letters fell off.

An hour later, the cleaner came in, dusted off the table, emptied the small waste paper bin and put a new plastic liner in its place, even though plastic hadn’t been invented yet. Tutting at the mess on the floor, he picked up the random heap of letters and carefully arranged them in a nice line on the board.