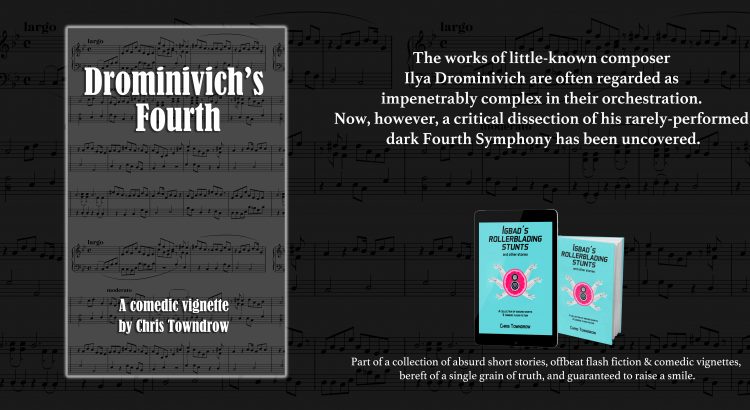 The works of little-known composer Ilya Drominivich, often regarded as impenetrably complex in their orchestration, have been the subject of little enlightening scrutinisation since his death in 2005. However, a critical dissection of his most under-performed work—the dark Fourth Symphony—has been uncovered.

The reviewer, music journalist Arnold Hiccup, analysed all Drominivich’s works, but this article, shedding light on one of the Isle Of Man composer’s later masterpieces, gives the most insight into the life and mind of what one denizen of the industry once described as “Just some bloke from an unremarkable island”.

Written between March and May 1970, Drominivich’s Fourth Symphony reflects a turbulent period in the composer’s life, charting notably his divorce from his ninth wife Jessie and the appearance of a hairline crack in the skirting board in his study.

The opening bars of the First Movement set the tone for the piece, rumbling timpani reflecting Jessie storming into the composer’s study to confront him about an affair she believed he was having. With the flitting horns, Drominivich waves her away, saying he’s busy, but the powerful double basses beat back the brass section’s protestations. In the background, the flute conveys Ellie the cat wandering around the room.

Brass and percussion argue for a while, laced with counterpointing minor key stirrings from the violins, hinting at the melancholy that is to come. This can be seen to grow into what is commonly known as the “divorce theme”. With an eruption of the xylophone, Ilya admits to the affair, describing Anna in rich tones of viola and cello that temporarily quiet the atmosphere. Jessie storms out in a clamour of drums and cor anglais, and as the movement ends, Ellie the cat trots after her, leaving Ilya to throw down his pen in a clash of cymbals.

In the Second Movement, Drominivich looks back on his life. The mournful tone of the oboe charts his unhappy childhood living in a scrap metal yard in the town of Douglas. His parents died before he was conceived, leaving him to be brought up by his only friend Santos. The second violins hint at Santos’ troubles, eking out an existence as a one-armed crane operator at the docks.

The brass section then takes up the theme of his first love affair with Leila, a butcher’s assistant. At age eighteen, they ran away to the countryside to get married, and the beautiful strains of the clarinet chart their passionate lovemaking. Then comes a comedy interlude, the trombone representing Drominivich’s attempts to learn to juggle, while Leila looks on, laughing and wishing she’d eloped with Santos instead.

The unusual division of the strings into eight sections allowed the composer to chart all his subsequent marriages over interlaced bars of happiness, betrayal and loss. The First Violin part is astoundingly complex, painting Ilya’s mental wranglings as he blundered from one woman to another, desperately seeking happiness. This was the time he began composing, using his art as an outlet for his feelings. As the movement closes, the piccolo and flute dance—the flute representing the orchestra’s rehearsal of one of his early concertos, and the piccolo expressing the feelings he was trying to convey in the same passage. The careful listener can hear a solitary flute playing Ellie’s theme in the final bars as the cat walks into the room, interrupting the composer’s pointless nostalgia.

The short Third Movement opens with raw shock as the composer, sat in his study remembering his past, suddenly notices the hairline crack in the skirting board. The trumpets blare with annoyance and then run amok as Ilya wonders whether the house will collapse along with his marriage. Kicking his chair back, Ilya goes to the skirting board crack, but as he does so, the French horn of the chair collides with Ellie’s theme, knocking the cat unconscious. The crack, portrayed by the triangle, takes up all Ilya’s attention, and he doesn’t notice Ellie’s theme vanishing.

The rest of the movement is dominated by Jessie’s return to the room to investigate the commotion. The “divorce” theme is developed, overlaid by the wailing trumpet as the woman sees the dead cat. Jessie, again as percussion, rails at Ilya for killing Ellie, but in a flurry of brass, he again throws her out of the room, slumping to his desk in the closing crescendo of cello and bassoon.

In the Fourth Movement, time has moved on a little, and the “divorce” theme is repeated with many variations, the most notable of these being the “signing the divorce papers” melody, which is slightly mournful when matched with Ilya’s theme, but almost triumphant when vying with Jessie’s restrained percussionist musings. Ellie, a gift to Ilya by Jessie, is not missed by the composer at all. The cat’s theme appears only briefly when the sad Jessie scatters its ashes over the Heston Services on the M4, the site itself being represented by the flugelhorn.

Jessie gone, Drominivich looks forward to a better life, thinking about Anna. This is the only re-appearance of Anna’s Theme, the violas representing her thighs and the tenor saxophone conveying Ilya’s hand snaking up between them. The tubular bells sound as Anna arrives at the front door, and she rushes into her lover’s arms, with the full orchestra united in triumphal and stirring chords that round off the symphony in happiness.

After writing this article, however, Arnold Hiccup was committed to a lunatic asylum to undergo treatment for a personality disorder. It seems he only believed he was a noted critic of classical music; in fact, he was an unemployed road-sweeper with a penchant for wearing earrings made of teabags.