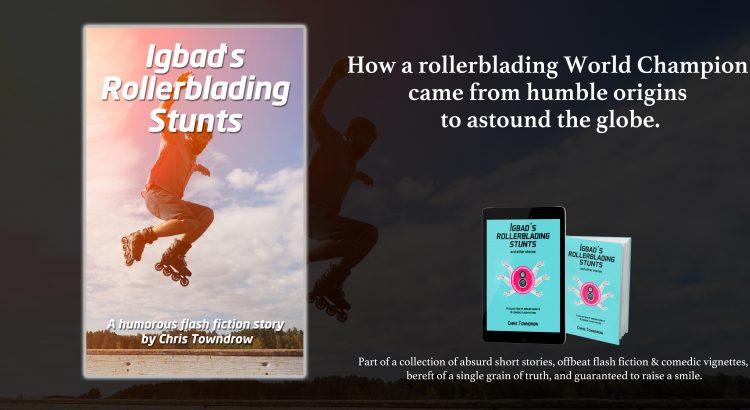 In 2021, Teodor Igbad of the Czech Republic was crowned World Rollerblading Champion. Little is known of this diminutive and foreign genius, but his enthusiasm and dedication to his craft are an example for rollerbladers everywhere.

In 2005, when Igbad was twelve, his father sold all the family’s worldly possessions to buy his only son the birthday gift of his dreams. Initially, Teodor’s progress was slow, and his father began to have second thoughts about the decision. However, in October 2006, he was rewarded when the boy learned to stand upright on the wheeled skates.

Igbad’s confidence began to grow, and by late 2007 he could be seen shuttling up and down the street outside their house in the suburbs of Prague. All the children in the neighbourhood would line the filthy pavements, beating sticks against the gutter and cheering as Igbad weaved along, wearing his favourite yellow bobble hat and blue skates.

Egged on by the crowd and with an eye to impressing local teen beauty Ivana Belzak, Teodor attempted his first stunt. It wasn’t a pre-planned affair, just a daring spur-of-the-moment lunge for greatness. Lying in the road was an empty tin of kidney beans on its side. Passing by to check out the situation, Teodor bladed up the road, made a complete turn and began his run-up. He built up a good head of speed, a Mexican wave of cheering urchins following him, and leapt ebulliently into the air.

A year later, after recovering from the broken collarbone and shattered knee, Teodor Igbad was ready to rollerblade again. Yet now, the streets were empty, and even Ivana didn’t emerge from her front door to watch him. This made him all the more determined. Day after day, he practised, leaping over chalk marks scribed on the road, until he was ready to re-attempt the can of beans stunt.

It was a bright warm day in May 2009 when Igbad began that run-up again, trying to banish the memory of failure from his mind, not daring to gaze into windows, to try and look past curtains, to wonder if anyone—especially his beloved Ivana—was watching him.

He cleared the tin by a full half-inch and punched the air in delight. Now he was ready for the big time.

Buoyed up, he coasted back to the site of his jump and cast the empty tin aside. Things were going to get serious. He bladed to the pavement and fetched his second obstacle, a spaghetti tin. He laid it on its side and powered off for his first run.

Igbad has always candidly admitted that his first attempt was aborted, his mind distracted at the last minute by the colourful writing on the can’s wrapper. But he was not to be beaten, and on his second attempt, he sailed majestically over with five-eighths of an inch to spare.

He was ecstatic. He was also level-headed and knew not to push himself, so he drew a line under that most splendid of days and went to bed, almost tearful with joy.

A fortnight later, with curtains undeniably twitching in the houses that lined what was fast becoming his arena, Igbad jumped the spaghetti tin with it standing upright. By the time evening came and his margin of clearance had bettered an inch, he was sure he saw Ivana Belzak’s face outlined behind her thin bedroom curtain.

By the following week, with an almost showy Igbad having graduated to two tins side-by-side, Ivana was out on the pavement, watching again, and the number of local children joining her grew day by day. It was late October when, after his first successful attempt to clear a hurdle two tins deep, he finally got up the courage to speak to his beloved. That night,  whilst still wearing rollerblades, the new local hero lost his virginity by the stagnant canal backwater.

By early 2011, with Ivana now a constant companion, Igbad progressed to increasingly impressive stunts. Quickly he’d mastered jumping diverse obstacles such as four spaghetti tins in a row, two bricks arranged in an inverted V, and a miner’s helmet. Kids were coming from nearby streets to watch, and even his parents had stopped beating him. Late in the year, he held a demonstration event, charging a small entrance fee, and used the proceeds to help buy a new pair of blades to replace his very worn blue set.

Everything snowballed from there. There was the odd injury, notably a broken finger when attempting to jump a line of pre-cooked chickens, but he was already the talk of the city and much of the country, too, signing autographs and resisting the temptation of groupies.

To celebrate his engagement to Ivana in October 2014, Teodor held a charity event, jumping, amongst other things; a Yamaha motorbike (upright), a disused lawnmower, a bus queue, a bus queue where the participants hadn’t been pre-warned, and the Minister of Finance. For the grand finale, he whipped the crowd into a frenzy before jumping over three women dressed as John Dory blanched in milk with a herb sauce and steamed asparagus.

Now famous across Europe, Igbad undertook a world tour to thousands of screaming fans. However, it was not without incident, nor controversy. In Milan, he grazed both palms after landing awkwardly following his signature jump over six men with red hair holding jars of honey. Far more notable was the now-infamous “Thames Incident”, which occurred during his spell in England.

Grandstanding, Igbad claimed on 11th June 2017 that he would jump the river Thames the following day. Crowds lined the London Embankments, their mood anxious but excited, waiting for the incredible stunt to play out before them. Igbad, however, occasionally prone to the odd practical joke, was talented but not insane. At 2 p.m., he proudly jumped the river a few miles from its source in England’s heartland, clearing the fifteen-inch stream with ease. The protestations of fair play were as loud as the cries of ‘foul’, but Igbad, although he left England knowing he could never play there again, retained his mantle.

From stunt jumping, he eased smoothly into competitive events, and his prize money rocketed. Ivana, his wife, was always by his side. In late 2019 he bought her a square mile of the Pacific Ocean just two hours from the Galapagos Islands and had it marked out with buoys in vermilion and chestnut, her two favourite colours. She knows she can go there whenever she wishes.

As new World Rollerblading Champion, Teodor Igbad hasn’t changed much. He’s still blonde and blue-eyed, loves his fans, wishes his parents would accept him and is always looking for a new challenge.

And he still carries that empty tin of beans wherever he goes.