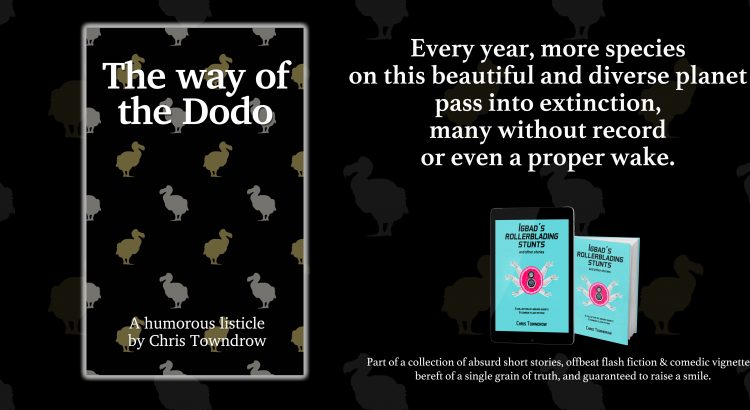 Every year, more species on this wonderful and diverse planet pass into extinction, many without record or even a proper wake. To go some way to redressing that balance, there follows a list of some of the more remarkable creatures that have graced this world whose last examples shuffled off this mortal coil between 1990 and 2015.

Discovered in Uruguay by Quincy Jellup in 1778, this creature bore all the hallmarks of a horse, but was no bigger than a chicken. Jellup catalogued seventeen individuals during his expedition, and fell in love with the creatures. He tried to take a pair home to England, hoping to establish the species there, but they went on the rampage on Jellup’s vessel, the Floating Coffin, and the ship sank off the Azores. The last survivor, owned as a pet by a Bolivian rancher, died peacefully in its sleep in 2003.

The Muscat centipede was unique in having 102 legs, and in every other way was almost indistinguishable from the more common Straightjacket Centipede, native to the same region. An experienced naturalist could also distinguish the rarer Muscat if he was carrying a sensitive microphone, as the female of the species was prone to very quiet coughing during the mating season.
The last known pair, kept in Johannesburg zoo, were inadvertently trodden on in 1996.

The Spotted Trenk was a freshwater fish similar to the pike, whose origins have been traced back millions of years. Characterised by its blue spots, the trenk was a hardy creature that was almost impossible to fish thanks to its excellent defence mechanism. When hooked on a line and landed on shore, the trenk would play dead until the fisherman’s back was turned, then leap from the bucket (or other receptacle), gnaw the fisherman’s ears, then hurtle back into the water. Inhabitants of the Alaskan region that was home to the trenk took to wearing ear guards in case they should unwittingly reel in the devisive fish.
The entire trenk population was wiped out by a mysterious disease between 1988 and 1994.

This small bird, native only to the Netherlands, is thought to have its origins in England, though never recorded there. Its unique call, a surprisingly tuneful rendition of the traditional Last Post bugling motif, made it easy to locate in the open Dutch countryside.
Its unusual taste for Gouda cheese was instrumental in its extinction. Jos Boww, acknowledged expert on the Warbler, had every nesting site catalogued, but after twenty years studying the species, the bird’s incessant song eventually became too much for him and in 1998 he set out Gouda traps at all of the Warbler’s locations, captured and pureed every last example.

The Pebble Crab, so named for its ability to uncannily resemble a small flat circular stone, was found only on the rocky beaches of the island of Hata in the South China Sea, and is thought to have evolved there ages ago.
In 2000, this unpopulated idyll was chosen for the millenium running of the World Rock Skipping Championships, thereby unwittingly consigning the entire species to an ignominious end.

The Hax was a fairly dull species of antelope, notable only for its interest in snooker. Only six examples existed in the wild since the ban on Hax hunting came into effect in 1971. The Common Hax, with its complete disinterest in tabletop ball games, has thrived in African reserves since the ban, but the White Throated cousin struggled to breed.
The death of the youngest animal, called Sven, was reported in May 2009, thereby wiping out the last snooker-following creatures, which numbered 12 different species in 1937.

This species of butterfly, once commonly seen around its South Devon habitats, had been on the wane since the introduction of the Wells family to the area in 1951. Scientists struggled for many years to explain this phenomenon or attribute the Green Marvel’s demise to some other cause, but the fact remains that on the day George and Mavis Wells arrived in Barnstaple, the first recorded heart attack amongst the species occurred.
Various coronary afflictions continued to claim young and otherwise healthy Green Marvels until the species dwindled into extinction in 1995. Ironically, the Wells family decided to move to Lincolnshire in 1996.

The Russian Grey Whelk was first recorded by Phineas Bax in 1809, living in colonies on the country’s icy northern coast. The species was the only known migrating whelk; the entire population heading south for the summer and collecting on a small Greek island.
The creature’s navigation mechanism is not well understood, but is thought to have something to do with the Earth’s so-called leylines which hippies are always banging on about.
The extinction of this intriguing strain of whelk was discovered in 2014, when Thomas Elberg, a Danish fisherman, hauled the entire shoal aboard his vessel by mistake. All the creatures were already dead, confused and overcome by panic due to the sacks of magnetic ore which had lain on the seabed since the loss of the vessel “Death Harbinger” in a storm over the previous winter.

Also known as the Jolly Adder, this beige reptile was first documented by Sebastien Point in 1833. Point was a deeply disturbed French naturalist (and naturist) who, after four months exploring the jungles of Borneo, started to believe all the flora and fauna were watching him. This snake, in particular, seemed to have a fixed grin, though this was in fact an upwardly curved marking on its chin. It was all that his guide, Pooga, could do to stop the unhinged explorer from going wild with a machete.
Natural predators caused the species to dwindle over the last hundred years, and until 1992 the remaining Smiling Adder was a resident of Barnstaple Wildlife Refuge called Arthur. He was shot to death after trying to gnaw Prime Minister John Major during a publicity visit.