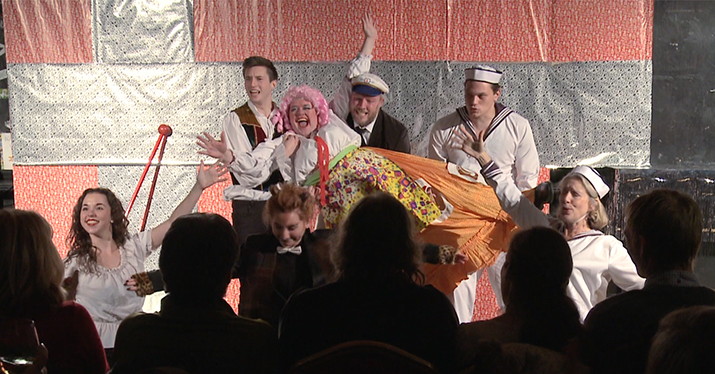 My first ever panto script was a version of Dick Whittington in 2004 and it was revived in 2009, and then premiered professionally in 2014. It was updated and appeared again in 2015.

Everyone knows the age-old tale of Mr Whittington : Dick meets pussy and they go on an adventure together. With a set-up line like that, what’s not to enjoy?

Neil Barrage, MP for the UTWIT Party, is running as a candidate for Mayor of London to further his dastardly plans for world domination. See what we did there?

Dick is on his way to London to seek fame, fortune and love (or at least lust). When he meets Peter the cat they form a bond as iconic as Murtagh and Riggs, or Saatchi & Saatchi (but without the spousal abuse).

Our trio of sailors, Watt, Ware and Howe have been conceived for comedy value alone and have very little to do with the plot, other than allowing us to crowbar in lots of ‘seamen’ jokes.

Lastly but most importantly, we have the love interest in the shapely shapes of Gloria and Fabula. Their local ironmongers shop is the kind of family establishment that B&Q et al are slowly putting out of business. We could have set the story in Homebase, but the staff aren’t smutty enough.

Can we make the word ‘election’ sound rude? Against all the odds, will Dick stand firm?

When you’re in a bad mood, as I was when I went to The Star in Guildford to see DICK the Adult Panto, it’s easy to pick holes in a show.

Taking my seat in the pub’s backroom, I sighed ominously at the stage production values. Along the back wall, the set consisted of rolled out Christmas wrapping paper and a few bits of tinsel foil, and when the cast raced onto the set to bash out the song, YMCA, replacing the letters with DICK, my only thought was to leave quietly.  I’m glad I didn’t though because the jokes come thick and fast as Dick, played by Anthony Fagan, journeys up to London from Guildford to live out his dream of becoming the Mayor of London, accompanied by Peter the Pussy (Christina Walsh).

When Dick finds lodgings at an ironmonger’s shop run by big old bird Gloria Stitz (Russ Evans) and her sex-starved daughter, Fabula Stitz (Faye Ellen), the villain appears in the shape of Neil Barrage (Marcus Churchill), who will go to any lengths himself to become mayor.

By this time, the play has already descended into the truly zany and we’re powerless to prevent nonsensical blurts of laughter. The relentless waves of throwaway slapstick cast aside all mental anchors as we find ourselves on a topsy-turvy boat with Captain Watt, played by Spencer Cummins, flanked by Harry Ware (Turan Duncan) and Tom Howe (Hilary Harwood), happily marooned on the funny side of life.

The hilarious song, ‘I’ve had a friend in me’, was only dampened by a lack of lighting on its starlet but that’s a small misgiving easily remedied as the play gains wilful notoriety throughout December.

Director Paul Chesterton’s disabuse of set decoration is anarchically flippant, adding to the play’s homemade blithe spirit, and his clever use of what can only be described as an intimate performance arena is commendable.

If you need a kick up the festive backside to welcome the restorative spunk of Christmas, get down to The Star for a bit of ‘DICK, the Adult Panto’.