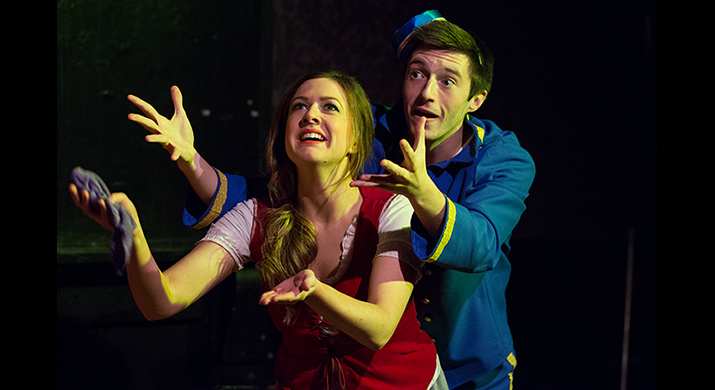 My first breakthrough into professional theatre was a naughty version of Cinderella – “Cinders, the adult Panto”.

Sex-starved Ugly Sisters with questionable facial hair, a drunk Fairy Godmother, Buttons and his racehorse (what?!) and delightfully shallow Prince Charming all revolve around a wonderful Cinderella who somehow combines lust, patience and a cleaning OCD.

The script is spot on, sending up not only the original characters but pantomime itself; Chris Towndrow has been careful to include all the clichés and some deliberately bad topical jokes.  A little bit of theft seems to have taken place too but I’m sure TV’s comedy writers all know that imitation is the sincerest form of flattery! There’s also lots of audience participation – you cannot help but be swept along in the tongue-in-cheek panto spirit!

But all this silliness did not for one second mar the cast’s talent. The wonderful singing voice of Helen Hart (Cinders) was used to great effect while Anthony Fagan (Buttons) had the audience (if not the pantomime horse!) eating out of his hand. And no one will forget the comic abilities of Alex Foott and Fraser Warriner (the Ugly Sisters): great slapstick, great delivery, great timing. Director and Musical Director Emma Trow was onstage for the whole panto, playing all the varied score herself and taking part in the action when the need arose.

Tickets are selling so well that an extra two performances have now been scheduled: 5pm and 8pm on Saturday 21 December. This is a silly, smutty, stupid and stupendous night out!”

The first night of the Chris Towndrow written Cinders – the adult panto was a hit. With a full audience of giggling grown ups, the cast did themselves proud with energetic performances glazed with traditional panto comedy and adult innuendo.

After a successful first year in business, this covetous comedic production, certainly not for all the family, is Guildford Fringe Theatre Company’s first Christmas production. Swap the traditional fairytale love story for one of lust and debauchery, sprinkle it with intoxicating fairy dust then balance it out with a traditional panto sing along song or two and you’ll find yourself roughly at the centre of this production.

Bursting onto the stage the eight strong cast greeted the audience with pitch perfect harmonies and theatrical choreography. As you would expect from any traditional pantomime, all the characters are present in this risqué take on the fairy tale of Cinderella. The earnest friend and his struggle with unrequited love, Prince Charming who wins fair lady’s heart, Cinderella herself, some gender-crossed personalities and a horse…of course. Alex Foott and Fraser Warriner played the two ugly stepsisters and dually carried the time-honoured part of the dame with shameless hilarity.

The not-so-subtle references to content of an adult nature had the crowd’s faces creasing, safe in the knowledge that no awkward, ‘what’s funny mum’ questions would be asked. Seemingly unhindered by the small space The Back Room of The Star provides, the cast maintained professionalism throughout. And with a voice that could reach to the far curvatures of the Royal Albert Hall, Cinders actress Helen Hart was the star of the show. With props hidden under chairs, an audience member forced into the ‘glass’ slipper and of course at least one ‘he’s behind you’ moment, the audience participation element that personifies traditional panto was amiably received. From someone who tends to avoid pantomimes at all costs I say well done to Guildford Fringe. I’ll be coming again.”

Not bad reviews for my first foray onto the professional stage.

Cinders has also seen more than one performance in amateur theatre, by and for adults and children alike – with rewrites of course!

Check out the video here.

“It was absolutely brilliant I have not laughed so much in ages.”

“It was great fun. I haven’t laughed so much for a long time. Looking forward to next year.”

“Saw the panto last night with my Missus and we both really enjoyed it. Lots of good ideas and funny gags.”

“Just wanted to say congratulations on your panto! Didn’t see you after the show to let you know that I thought it was excellent! Laugh out loud funny, great songs, a cast that was really up for it and the whole thing worked in the intimate venue. Obviously it has to start with a great script, which it did! Pat on the back to you, sir! Nice work!”

“I went to see Cinders together with my wife Kate and two boys, ( aged 19 and 29) so I just wanted to congratulate you on a great script and to let you know how much we all enjoyed the evening. We look forward to more in the future?”

“FANTASTIC first half of the show tonight. Great to be in the audience and not just photographing it – awesome audience participation and good vibe all round. Well done Chris Towndrow!!!”

“Loads of fun at ‪#Cinders the Adult Panto tonight! Thank you to ‪@GuildfordFringe for a naughty, silly night out! :-)”

“Brilliant night with ‪@GuildfordFringe at the Adult Panto. So funny, and a great alternative night out. Thank you”