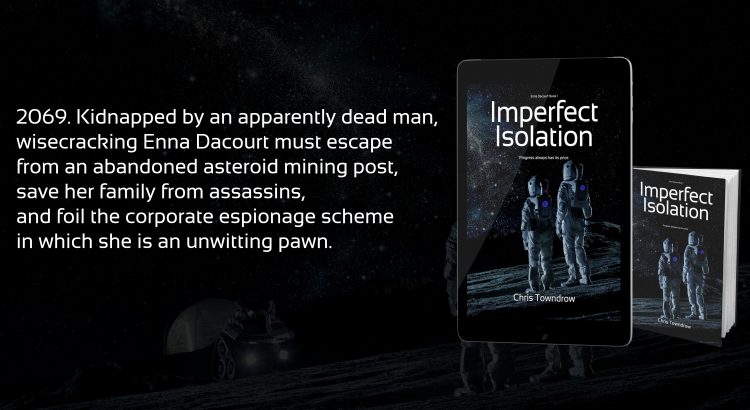 This was my first sci-fi novel since completing “Sacred Ground” in 2005.

In 2017 I came across some old ideas, including a few chapters of what soon became “Imperfect Isolation“. My notes didn’t make sense so I took the plot in a whole new direction to what I’d been planning some 20 years earlier – and all the better for it. It had a new hero – a much more three-dimensional one, and more action than originally intended. I finished this novel in late 2018.

Set in 2069, and at heart underpinned by foreseeable future tech, this pits a wisecracking heroine against a roboticist and a global tech giant.

“In northern Sweden, the son of local cop Kennet Carlsson comes across the body of Andreas Lindt, a crewman listed as being aboard the Fleet ship Belgrade, over 250 million miles away.

Escaping the apparently doomed ship, wisecracking Lieutenant Enna Dacourt is forced to pilot a shuttle towards an inconsequential asteroid. Her captor is Andreas Lindt.

In New York, a murderer is found dead. His accomplice takes flight towards the border, fearing that unseen powers are at work.

At a chateau in rural France, two men await a signal that will determine the fate of their unsuspecting hosts.

Soon, Enna discovers that the luck of her escape is nothing of the sort. She is a pawn in a scheme that a powerful man cannot afford to lose.”

I enjoyed writing the book, especially the lead character, so much that I quickly started working on a sequel.

The fists beat silently against the door only once more. Then the echoing thud of the door mechanism rolling into action and the head whipped round to begin to take in, wide-eyed, the true horror of what had been inevitable.

The hiss of escaping air flooded the chamber even before the eyes could make out any divide between the two rumbling expanses of steel. Then it came. A wafer-thin slice of blackness slowly stretched out by the receding walls. The hiss had become a rushing torrent and the world in the chamber was trying to escape.

A hand shot out for the grab rail and clamped on – and not a heartbeat too soon – as feet were lifted from the ground and space beckoned to him. He knew it was there – he didn’t need to turn a head and stare down the throat of it. He hung like a puppet in the half-vacuum, gulping involuntarily, forcing the dying air into his lungs, straining with every ounce of muscle, reaching a flapping arm out towards the rail for greater purchase.

The doors clanged home into their recesses and the bellowing roar of air evaporated.

He gasped, his strength failing, fingers losing their grip. The mist of unconsciousness began to descend, the arm shook and the fingers gave up their fight.

The open doors took him, his body convulsing, sucking uselessly for air he would never find. Out, out of the chamber and into the infinity, to begin a journey that would never end. The eyes fixed blankly on the stars, the arm outstretched towards a hope that was never there, he began to tumble slowly, end over end, end over end. The ship retreated and death took him in its cloak of darkness.