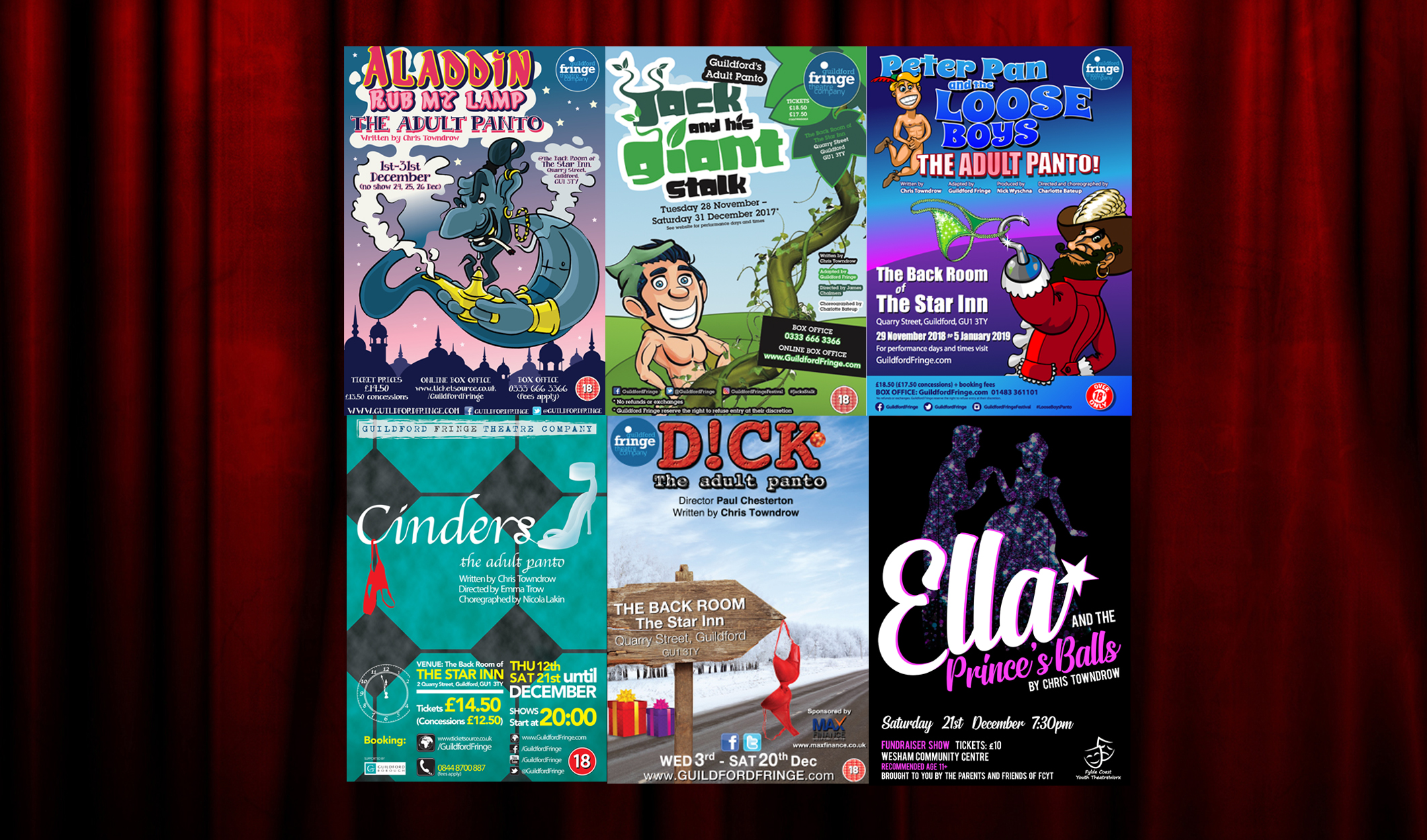 Aside from a few vignettes, short stories, nonsense poems, ‘normal’ poems, an odd collection of haikus and a few screenplays, I’ve had the most fun dabbling in the world of theatrical comedy as a Pantomime playwright.
Oh no you haven’t.
Oh yes I have.

In 2004 I met a lovely lady called Lizzie Flynn who ran a very amateur theatre group (basically some friends she strongarmed onto the stage!) and was looking to put on a charity production.

Long story short, somehow I agreed to write an adults-only panto called “Dick” which sold out the village hall for a two night run, raised some cash and made a lot of people laugh. She even insisted I have a speaking part myself. Outcome – I am no Sir Ian McKellen.

A few years later in 2010 we resurrected and rewrote the script for another smaller adult production as “Dick 2.0”. Also, after a MAJOR rewrite, we had fun with the young children in Lizzie’s school theatre group doing something that was a big step up for them – a more traditional telling of “Dick Whittington”.

In 2013 I was commissioned to write “Cinderella” for the after-school kids group and a more grown-up “Carry On Cinders” for the adult amateur class which was performed in 2014.

That was just the precursor to a major breakthrough, when I met theatre producer Nick Wyschna in Guildford. “Cinders” in full risque adult-only form premiered it’s 10-night professional run in Guildford on December 11th 2013.

In 2014 the Guildford Fringe Theatre Company performed another adult pantomime, a reboot of my original script of “D!CK” for a new audience. This sold out 16 performances.

The amateur group staged a new script – “Aladdin” in February 2015 over two nights to happy charity audiences. The script was then rewritten for children and performed twice more that year.

Winter 2015 was bigger and better, with the professional adult version of “D!CK” moving to the HG Wells Theatre in Woking.

In Guildford, “Aladdin – Rub My Lamp” became easily the longest run to date, playing in The Back Room from 1st-31st December 2015, and selling out all performances.

In 2016 the amateur group resurrected “Cinders”, and in early 2017 performed “Dick” again to a charity audience of 250. I had a year’s break from the professional Fringe panto.

In winter 2017 the ante was upped with another new story – “Jack and his Giant Stalk“. This takes the simple original premise and ditches the giant and golden egg, and replaces them with a whole new kingdom in the clouds. Plus a new villain, a love interest and a whole lot of nonsense. Guildford Fringe sold out performances throughout December to over 2000 people.

In Winter 2018 my new script, in conjunction with Guildford Fringe, was “Peter Pan & The Loose Boys” – a skewed retelling of the old tale featuring an ageing Tinkerbell and Darling sisters instead of brothers.

In 2019 a new version of Cinderella  – “Ella” premiered as a teenage am-dram performance, and an adult version of the script is available to license. It was also performed by a youth theatre group in Lancashire.

In 2019 I completed the script for “Troy Story“, which does everything (well, almost everything) that a Panto does, without being a Panto. It’s a Grecian romp which takes many liberties with the Trojan War.

One thought to “Pantomimes & Plays”