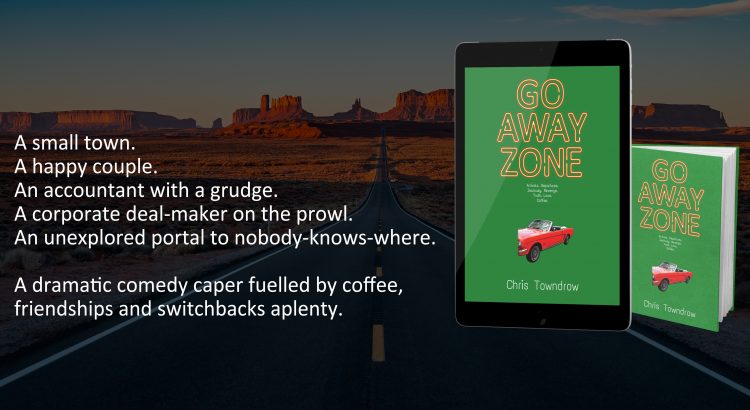 ‘I thought it would have been shinier.’

‘What?’ Lolita raised a single eyebrow in the way that, weeks ago, Beckman felt only she could, before remembering all women had some form of “Really, dufus?” disguised as something less overtly condescending/challenging/disbelieving*. (* delete as applicable).

He pressed on regardless. ‘I thought it would have been, you know, shinier. More metallic.’

‘Is that really what you think?’ An eyebrow remained buried in the tone.

‘What do you want me to say?’ (A good standby phrase, given no man on Earth ever fully knew what any woman was thinking, even one he might be betrothed to.)

‘You could accuse me of joking. Teasing. Lying.’

‘I may not know all your foibles, but it doesn’t strike me as a joke, and it can’t be a lie.’

‘Because we met after you called me dishonest.’

‘I said you were likely to be.’

‘Either way, you’d be a heel to lie to me. Plus, if we’re getting married, we need a bedrock of honesty.’

‘If you’d ever let me plan the date.’ She rolled her eyes.

‘Sure, hijack a discovery like this,’ he waved a hand towards the space five yards in front of them, ‘To kick my ass about your hot topic.’

‘When a girl hears wedding bells, there is no other topic more important.’

‘For a guy who’s seen half the country and met like a million people, you don’t know a hell of a lot.’

‘Enough with the flattery.’ He flashed a grin.

She poked her tongue out.

This was not an unfamiliar coda to their exchanges—and he loved her more for it. It kept him young and vibrant—although he’d hardly felt young and vibrant during the past decade. He’d been on a trundling treadmill until she’d veritably jabbed the Stop button and sent him careering backwards into her arms.

He returned his attention to the lack of a view they’d come to witness.

Only being honest—expected it to be shinier. Grander. Strangely alien.

Blame a guy for having unrealistic expectations based on a misspent youth in front of the TV?

He paced warily, taking extreme care not to get too close to something he couldn’t see or touch. Or smell. Or hear. Or taste, even if he got close enough, which he was in no way tempted to do.

Are you tempted? Of course, you are. A tiny part. Come on—curiosity—it’s how we’re built. It’s what drives innovation. An inquisitive mind is a great mind.

Except you’re a lightbulb salesman in a small Arizona town. Edison, you are not. He used a brilliant scientific mind. You want to do the equivalent of poking a sleeping lion with a short stick.

Well, part of you does. A tiny, tiny, stupid part.

Plus, you poked a few lions already this year—and look how that turned out.

We only remember the good stuff—the happy days. Not the dumbass things we did along the way.

Miss Lolita Milan was eyeing him with interest, love and almost maternal disbelief. The man-boy had a new toy.

Except the man-boy wasn’t sure how this new toy worked. Or what it was. Or where it was.

‘How in hell have you all kept this a secret?’

‘You never met my father,’ he warned.

‘—but a thousand of them turning the town into a circus is nobody’s idea of fun. Come on, Beckman, you know Sunrise—’

‘—and we’re a keep-ourselves-to-ourselves kinda place. Besides,’ she said with a shrug, ‘Maybe it’s gone now.’

‘Gone?! You brought me here to show me something you can’t even see when it is there, and now say it may not be there anymore. And how would we know? Maybe it is a joke.’ His eyes narrowed. ‘Is that it, honey? Wanted to laugh at the new guy? Bring him to a dead-end road, spin an apocryphal tale and watch him skulk around like a curious cat, afraid of a mouse which may or may not be dead?’

He tried the single raised eyebrow thing but failed dismally. He always failed dismally, but it didn’t stop him from trying—for one fundamental reason.

He was an idiot.

She didn’t rise to it. She’d learned not to because (1) she knew he was joking, and (2) she also knew he was an idiot. One she dearly loved.

Instead, she put a hand on his upper arm. ‘Beckman, I am deadly, deadly serious. For one, I thought you’d be interested, and for two, I don’t want you absentmindedly wandering in there one day and poof!’

He gazed at where her eyes were habitually shielded by reaction sunglasses, well-used to the impression of being able to see beyond them, took her hand and held it tenderly.

‘A guy knows it must be love when his girl doesn’t want him to inexplicably vanish from the face of the Earth.’

‘Certainly not while he has her car keys in his pocket.’

‘Ah. The truest of true love.’

‘And definitely not until he’s changed his Will.’ She fought a smirk.

‘I have virtually nothing to my name, but it’s all yours.’

‘I believe that is the dictionary definition of marriage.’

‘Ah. The hot topic. It’s been at least two minutes. I was worried.’

‘Going in there?’ He jerked his head towards the thing neither of them could see and which may not be there in any case.

‘Of course. Come on, you don’t poke a sleeping lion with a short stick, do you?’

Absolutely not. Never crossed my mind.

‘What about a long stick?’

She tilted her head down to reveal raised eyebrows over the rim of her glasses. After the Tongue Poke, the Disapproving Schoolmarm was her second favourite weapon. Perhaps it was the man-boy’s fault for doing or saying so many things that warranted its use.

She was his own sleeping lioness, and he always had a proverbial short stick in his pocket. In the past weeks, he’d elicited many purrs, some growls, the occasional roar. Twice, he’d been clawed. Yet, he still carried a stick.

Because you’re an idiot.

But at least you know you are, so that’s all good.

Love will do that.

So, any time in the last romantically barren decade wouldn’t have been disastrous to have diced with poof!, but right now was Dumb with a capital DUMB.

He kissed her to remind himself of those capitals.

He turned to look at the Whatever It Was. She put hands on hips, indulging him, and they gazed towards the point in space where Strange Things Happened. Allegedly. He sought even a flicker of evidence to dispel any remaining notion that this represented one big hoax. Just a sign, a grain of truth. Sunrise’s version of The Turin Shroud; something to give bedrock to belief.

After five minutes, the September sun climbing towards its warm zenith, he was turning away when something happened. Only a flicker, six feet above the ground. A pixelation. A glitch in The Matrix. As fast as it came, it went. The view of the scrub desert and distant mountains hazed oh so slightly. As if Whatever It Was winked at them.

His mouth opened, and he pointed involuntarily.

Day One, when he’d met Saul Paul for the first time, the eye-patched tow-truck driver had quoted Shakespeare, as easily as putting on a hat, but as unexpected as if he’d been a frog uttering the words in Aramaic.

There are more things in heaven and earth, Horatio, than are dreamt of in your philosophy.

But this—the Whatever It Was? If poor Horatio had encountered this, he would have shat pineapples.

‘We simply get on with our lives?’ There was childish disappointment in his voice.

‘What else did you expect? Play with it?’

‘It’s just….’ He didn’t know what it was just, except that it was. It seemed a colossal anti-climax to walk away.

‘Beckman. Darling. You’re new around here. This is part of the tour, the full disclosure. In Sunrise, we do get on with our lives. What’s the alternative?’

He opened his mouth to offer some alternatives that would (1) definitely be made up on the spot, (2) probably not be well received, and (3) likely have been ventured and rejected many times before by more qualified—or at least more longstanding—people than he.

He closed his mouth. She kissed it to mollify him, slipped a hand into his and led him back to the car. He glanced over his shoulder. The tarmac single track road petered out into the wilderness as if abandoned mid-construction. It served no purpose, led nowhere. Or nowhere that could be identified, quantified or any number of other -fieds.

‘What do you call it?’ He tried to sound disinterested.

READ MORE ABOUT THE BOOK HERE, GET FREE CHAPTERS HERE, OR SHELL OUT A SMALL AMOUNT FOR THE FULL ebook